If Donald Trump is controlled opposition, Clinton couldn't have picked a better opponent

So many months ago, I noticed something interesting about Donald Trump. He just doesn't fit as a man to run for president. He's a billionaire and could pretty much do whatever he wants. Even in the last speech I saw him give, he said, "I didn't have to do this, but I wanted to give back to a country that has been so great for me and my family." He openly admits in his victory speech that he doesn't have to run for president.

After reviewing his policy positions and statements, often in agreement with Bernie Sanders, I just found it so odd that he's running for president. So I wrote, The quandary that is Donald J. Trump, my first article to seriously question his quest for the White House. I wrote that article back in September of 2015. Even then, I was able to find one sitting Congressman who was suspicious:


For example, Rep. Carlos Curbelo (R-FL), has this to say about Trump:

"I think there's a small possibility that this gentleman is a phantom candidate," Curbelo said, as quoted by The Miami Herald. "Mr. Trump has a close friendship with Bill and Hillary Clinton. They were at his last wedding. He has contributed to the Clintons' foundation. He has contributed to Mrs. Clinton's Senate campaigns. All of this is very suspicious."

I wrote about the same issue in, "A thought experiment about Trump: When the jackass becomes the joker for the GOP", predicting that, after nearly destroying the GOP, Trump would carefully set his campaign on fire, just to not make it look like he's throwing the election to Hillary. A look at the recent campaign filings show that he's being clobbered by Clinton in fundraising. He plays well to the voter base, but I doubt establishment donors are very happy with him.

His campaign is going broke. He's not raising money for Congress let alone president. The press is becoming quite unrelenting in their criticism of Trump and they glorify Clinton, warts and all. Check out this screenshot I took this morning while searching for news on Trump: 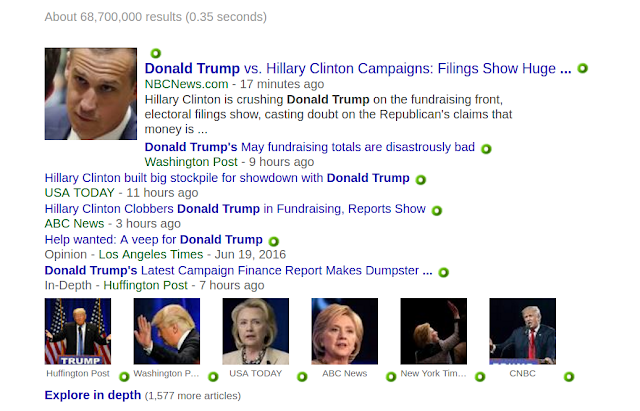 And then there's this: A libertarian candidate is polling very well by historical standards in a 3-way race between Trump, Clinton and Gary Johnson, the Libertarian candidate for president. Real Clear Politics has him polling at 9% nationally. He's doing what Richard Boddie did to B-1 Bob Dornana in the 1990s. He is splitting the conservative vote for the Republican Party. That is a huge chunk of the voter base that Trump needs to win.

And of course, Trump continues to put his foot in his mouth and pull the trigger. There are times when he's coherent and even presidential. But I keep thinking that he's an entertainer as well as a businessman. It is hard to be good at so many things, and it's very hard to be a politician running for president. If he's a serious candidate for president, I don't see how he can have enough hours in a day to run his business, be an entertainer (well, he's not hosting reality TV much anymore, unless we're talking about his campaign) and campaigning.

With the exception of Bernie Sanders, I see this entire election as sort of a farce. The press is making Trump out to be this sort of enemy that we're all supposed to oppose, but we're only supposed to do it behind Hillary Clinton. The propaganda news rolls of WWII come to mind here. I guess the sinker for me is this: Bill Clinton and Donald Trump talked politics about 3 weeks before Trump announced his candidacy. Question is, did Bill Clinton encourage him to run?

I believe that suspicion is brewing among the elite Republicans, too. Delegates are starting to line up opposition to Trump at the convention. More than a few delegates don't see him as a viable candidate for this election and I suspect that he may be replaced at the last minute to avoid a complete disaster for their party. Perhaps their "Anybody but Trump" campaign is a clue. After watching Trump out the Republican base as misogynistic, racist and homophobic as well as xenophobic, I can't help but have a quiet laugh to myself that he's played the GOP so well and so, so hard.

This isn't to say that Democrats are going to walk right into the White House. There is still Bernie Sanders preparing for a contested convention. He has not conceded and, as I hope, he may not have to. If Trump is truly controlled opposition, we'll know it if the GOP manages to change the nominee at their convention. They could bring out someone who could beat Clinton and that would be that.

I don't think it's impossible for the GOP to do this. John Kasich and Marco Rubio actually polled fairly well against Clinton, certainly better than Trump. If they do that, Democrats may need Sanders to run, after all.
Posted by digitalfirehose at 5:40 AM

Revelation 11
[15] And the seventh angel sounded; and there were great voices in heaven, saying, The kingdoms of this world are become the kingdoms of our Lord, and of his Christ; and he shall reign for ever and ever.