A thought experiment about Trump: When the jackass becomes the joker for the GOP

There are two interesting side shows developing in the GOP primary contest. First, there is Bret Baier saying that D.C. Republican elites are talking about supporting Hillary to stop Trump. There is a palpable sense of panic among GOP elite that Trump could actually secure the nomination. This is the best they can do in response to Trump after he exposed the GOP base as a racist, misogynistic, war-happy and xenophobic culture.

Then there is a poll in Michigan revealing that 9% of GOP voters will vote for Hilary to stop Trump from winning. Trump is after all, inspiring record turnouts for those who may want to vote for Trump. But there are just not enough Trump opponents to defeat him. There are clear signs within the Grand Ol' Party of a sense of resignation that Trump is going to win the nomination. Note also that there is a real concern that Democrat turnout has been lower, but so far, most of that lower turnout has been seen in Red States. Perhaps that is the impact of stricter voter ID laws passed by conservative legislatures in recent years.

These incidents seem to be part of an unrelenting trend that shows how truly awful it is for many in the GOP to have Trump leading the delegate count. They wish dearly for him to go away, quietly. The fact that anyone at all would think of voting for Hillary over Trump as a member of the GOP is truly an awe-inspiring phenomenon to watch. Given the almost visceral animosity that many in the GOP have for Clinton, any suggestion of voting for Clinton is clearly an act of desperation.

Some are declaring Trump to be just desserts for a party that has pandered to the hard right, and the racists in their fold. The GOP has created an environment that is ripe for a man like Trump to run for president. They have tried to be covert about it, but Trump has blown their cover to smithereens.

Deep in the subtext of political discourse, I see something else that few have talked about. Mind you, that the following is almost pure speculation, but I think it's plausible. I've been thinking about it for some time now and have been hedging on whether this idea may be true or not. I will say it right now, so that you don't even have to take me seriously when I say that Trump is running as a foil to ensure that Hilary wins the presidency.

There. I said it.

Go back now, to the wedding that Bill and Hilary Clinton attended for Trump. Here's the article from Politifact establishing that they really did attend Trump's wedding in 2005. And here's the picture: 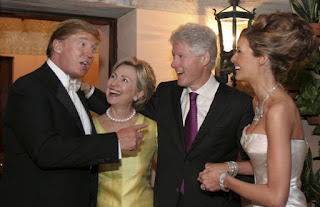 Notice the body language. They are physically close and Bill Clinton has his hand on Trump's shoulder. That is not an act of deference to a billionaire. They really are friends in that picture. At least they appear to be, for if that is a lie, they did a great acting job.

I'm not the only one going down this path. Check out this article at the very conservative Washington Times. There you can read a slow walk down the path to seeing Donald Trump as a Clinton plant in the GOP. Bombastic, surreal and supremely alienating to key demographics like Latinos and African Americans, Trump seems to be doing a fantastic job of humiliating the establishment GOP. I honestly can't think of anyone better suited to do this job. That same article also notes that sometimes, Donald sounds more like a liberal and mentions that Donald Trump has made significant contributions to Democrats, too.

For her part, Hillary Clinton denies that she was ever friends with Trump. But she seems careful on her wording and does not mention her husband Bill. She's a lawyer, so her wording is very circumspect. Not only have Bill Clinton and Trump been friends (they've played golf together and Trump loves golf), Trump has made generous donations to the Clinton Foundation and to Hilary's campaign. And it turns out that Bill Clinton made the suggestion to Trump to run for president. That story appears to be confirmed by this article in the Washington Post. Why on earth would he ever do that?

So how could this actually play out? The GOP convention is July 18-21 this year. The Democratic convention is July 25-28th. If Donald Trump wins the GOP nomination, he could play nice until the Democrats wrap up their nomination. If Clinton wins, Trump could set his campaign on fire again just as he has done before and find a way to hand the election to Clinton.

If Sanders clinches the nomination, Trump could continue his campaign as before, and they could both run a hard campaign for the independent voters. Independent voters are now the largest voting block, bigger than either major parties. Trump and Sanders both poll very well with independents compared to their establishment counterparts. This is a rather sore point for Hillary Clinton as she is not polling well with independents compared to Sanders. The Bitchy Pundit notes with alacrity that Clinton fares better in closed primaries than with open primaries. That is where the independents come in and that is how Sanders is likely to win the nomination.

Considering the way that Trump has embarrassed the GOP establishment, it is hardly a stretch to see him find a way to hand the election to Clinton to finish the job - if he wanted to.

That is the end of my thought experiment. I'm not saying Trump will actually hand the election to Clinton. I'm simply offering the suggestion that he might.
Posted by digitalfirehose at 4:06 AM