The apparent death of neoliberalism, a democratic socialist and the dumbest idea in the world

I had the good fortune to get some reading in today and I'd like to share with you what I found. First, I would like to treat you to this article in Forbes, about "the dumbest idea in the world". Steve Denning has written a very good analysis of how we got here, to this place of unbelievably bad inequality (video). To Denning, it comes down to stockholder share value:


What is this strange idea? In the 1970s, the largest enterprises—the publicly owned corporations—began adopting a notion that even Jack Welch has called “the dumbest idea in the world.” In an effort to offset declining performance and profits due to increased competition, these companies embraced the notion that the very purpose of a corporation is to maximize shareholder value as reflected in the current stock price. The focus of these firms turned inward towards singlemindedly extracting value for the company’s shareholders, ahead of delivering value to customers. Executives were compensated in stock so that they would focus on the goal of increasing the stock price.

Denning's article points out that in the late 1970s, there was a divergence between productivity and wages. For some reason, wages stopped rising with productivity. Denning believes that this focus on share prices of corporations trading in securities markets around the world, but particularly in America, has been the "smoking gun" that is killing the middle class. Enterprise had started to forget their mission to create customers, not bankrupt them.

I find his article interesting for a number of reasons. The article details very nicely and accurately what has happened in the last century of the American economy. His article brings together a nice collection of facts and figures, as well as changes in how American businesses worked, as well. Better, much of what he says corresponds well with the writings of an economist who happened to see the collapse of the housing bubble far in advance of the economic crisis that arose from it.

That economist is Dean Baker, of the Center for Economic Policy Research. In his book, "The End of Loser Liberalism" (free PDF download), he traces out essentially the same history as Denning. However, where they really differ is on motivation. While Denning pins the blame squarely the misguided desire to elevate stock value above all else, Baker pins the blame on the simple struggle between labor and capital. The takeaway from Baker's book is that the rules have been rewritten to favor capital over labor at the expense of the economy in general.

Baker and and Denning are in good company with another economist, Thomas Piketty. In his book, Capital in the 21st Century, Piketty shows that over long periods of time, capital tends to outperform labor. In this context, we can see that the struggle between capital and labor is easily won by capital, particularly without adequate restraint. While Baker notes in his book the central elements of the struggle and what can be done to strike a balance between the two, Piketty simply says for at least the last 200 years, capital has won that struggle.

And now, as we see the the aftermath of a serious decline in the fortunes of the middle class, we are coming to a point where the wealthiest people in the world can no longer be supported at the current rate of wealth transfer from poor to rich. It is simply unsustainable. The economy grows when the money in that economy circulates among the greatest number of people, not the other way around.

At this juncture, we see Bernie Sanders welcomed with open arms by a middle class weary of the deceits put upon them by neoliberal politicians like Bill and Hillary Clinton, Barack Obama and every Republican president that has held the White House since Kennedy. At least Eisenhower could see what was coming and fought hard for the middle class. We've been sold on the idea that if we let rich people have more of the money they take from our labor, that we'd see a better standard of living.

But that's not what happened, and you can say all the nice things you want about Ronald Reagan, but he didn't just get the ball rolling, he sent it plunging down the north slope of Mount Everest and skied down the other side. Maybe he had good intentions, maybe not. I say for him and many others like him, "Sincere delusion is the cloak of avarice." Sincerely deluded people believe in lies, and they use those delusions, a sort of denial, as justification for their avarice.

Bernie Sanders is 74 years old. He can remember an economy that worked for everyone. He came along at the right time to set the stage for the change we need. Not only has he energized a massive voting block capable of putting him in the White House (under the right conditions), he has motivated 12,000 people (at last count) to consider running for office.

Jordon Chariton at MSNBC correctly notes that what Sanders has started (and he is just getting started) is far bigger than getting into the White House, and I believe he's right. I think that the White House, as a goal, is ancillary to the thrust of the Sanders campaign. Even if he loses the Democratic nomination, millions of people will be watching and listening where he points to and who he talks about. He will have greater power whether he wins or loses. If he wins, he's in the White House and he will not just "take what we can get" from the Republicans like Bill and Hillary Clinton did in the 1990s. He will honestly fight to implement a progressive legislative agenda from the White House, or not.

Even if he remains in the Senate, he can focus millions of eyes and the brains behind them, to hold Clinton accountable at every attempt to go "moderate" (a nice name for neoliberal). He can spend a long, long time still in the Senate. Strom Thurmond lived to be 100 while a Senator. Sanders could probably match that.

Sanders will be at the convention. He will get a prime time speaking slot. He will have an impact on the platform, like it or not. He may run as an independent, Green Party or Democrat. Who knows? He wrote yet another great article imploring the Democrats to wake up. He plays a long game, so I think the following meme will give us a fair indication of what to expect in the coming years: 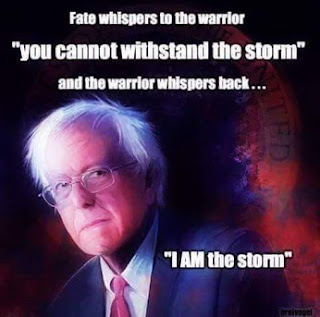 Bernie or Bust.
Posted by digitalfirehose at 5:12 AM