The real losers of the debate that never was

Today, I had an interesting debate with someone about the "Clinton machine", described in the meme below: 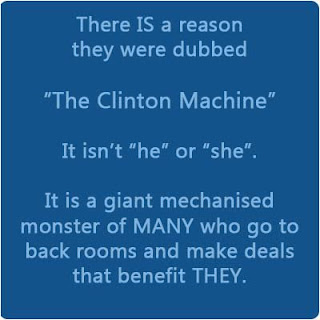 During that debate I had on Google+, I pointed out that the term "machine" was a metaphor to describe an entity that does not have empathy for others. I went on to suggest that in the act of failing to honor an agreement to have one more debate before the California primary, Hillary Clinton committed an act totally lacking of any empathy for Bernie Sanders supporters.

Looking back on those words, it also occurs to me that Sanders wasn't the only loser when both Hillary Clinton and Donald Trump declined to debate Sanders. The loss on the Sanders side was obvious - he lost a huge opportunity for free face time on TV and to allow viewers to compare him side by side with his opponents.

But I suspect the loss was even greater for the presumptive Democratic nominee, since her act of declining to debate Sanders has only diminished any real chance of uniting the party behind her if she should secure the nomination. She could have used that chance to appeal to Sanders supporters and did not.

Donald Trump also seemed interested in debating Sanders but did not. Afterwards, he made varying excuses, but the consensus of the social media I have read says that he didn't have the courage to debate Sanders. The same consensus was reached about Clinton. Yet, both of them profess a superior position in the election and receive an enormous amount of free support in the media not offered to Sanders.

Candidates who are confident in their position, status and polling, should have no problem debating, anytime, anywhere. Even Clinton herself chided Obama on the same point in the race for the Democratic nomination in 2008, on camera. Yet here she is, in a superior position in the race for the nomination, and, having agreed to a debate months ago, backed out. That is a sign of weakness, not strength, and most assuredly contributed to the destruction of any chance she might have of uniting the party behind her later.

By declining to debate Sanders, both Trump and Clinton denied themselves an opportunity to appeal to the supporters of Bernie Sanders, all in an effort to deny him coverage and opportunity for him to show how he compares to either Clinton or Trump at this late stage of the nomination. Both Trump and Clinton have shown a lack of empathy for Sanders and his supporters and by doing so, imply that they don't need the votes of Sanders supporters to win the election in November.

Both of them essentially said, "screw you" to Sanders and his supporters and will not see their votes in November as retaliation. For a candidate to win the election, he or she must appeal to more than their base, more than their party. That candidate must appeal to the independent voters, now comprising some 43-45% of the voters, depending on who's counting. That same 45% is bigger than the voter contingent for either one of the major parties.

The numbers for each party, 26% for Republicans and 29% for Democrats, suggest that both parties are not really engaged with the American public. As American institutions, such low party identification rates suggests that both parties have failed the people they purport to serve.

It has been suggested by numerous pundits that with the Trump and Sanders campaigns, we are bearing witness to the end of both major parties. Both Trump and Sanders are outsiders and could not have come as far as they did without help from the political duopoly held and defended by the Republican and Democratic parties, respectively. Both campaigns suggest very clearly, that a rapid change is about to occur, despite any resistance from the oligarchy that now rules.

Bernie Sanders is the only candidate that I've seen so far to show true empathy for the rest of us. Noam Chomsky puts it this way:

Well, Bernie Sanders is an extremely interesting phenomenon. He’s a decent, honest person. That’s pretty unusual in the political system. Maybe there are two of them in the world, you know. But he’s considered radical and extremist, which is a pretty interesting characterization, because he’s basically a mainstream New Deal Democrat. His positions would not have surprised President Eisenhower, who said, in fact, that anyone who does not accept New Deal programs doesn’t belong in the American political system. That’s now considered very radical.

That return to the new Deal appears to be what Hillary Clinton is fighting and that why I'm still supporting Bernie Sanders.
Posted by digitalfirehose at 4:45 AM