A one-sided California election in favor of Hillary Clinton

A clear pattern is beginning to emerge. Article after article is appearing in social media. Memes are telling the story in short, concise messages. Here's an example: 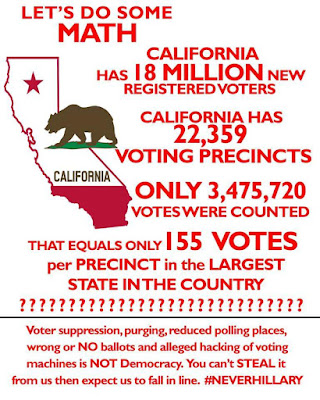 That's an interesting question. Where did the votes go? Here's an article that asks the question directly, "Where did 12 million voters go?" The LA Times estimates that 5 million votes were cast by mail and they have yet to be counted in something more like election week than election day.

But here's where it gets really interesting. All of the major television networks canceled their exit polls for the lat remaining primaries, including California. Luckily, someone had the presence of mind (and the money) to perform a very well controlled exit poll. According to ElectionJusticeUSA, the exit polls deviate 16% for the Democrats and only 0.7% for the Republicans.

This is a pattern that has repeated itself over and over again this election. How is it that the GOP has has had so few complaints or reports of election problems and yet, the Democrats can't seem to pull off a decent election? This pattern suggests a very real problem of election rigging.

Greg Palast, the man who broke the story of election fraud in 2000, has more details here. He doesn't suggest a conspiracy, but he does point out the problems in the California primary. Where no party preference voters needed to get a crossover ballot to vote for Sanders, poll workers were instructed to give NPP voters a provisional ballot. That almost guarantees that those votes will be the last to be counted if at all.

And now we see that the Secretary of State for California, Alex Padilla, the man in charge of statewide elections has also been seen fundraising for Hillary Clinton. Puh-lease. Can we show at least a modicum of neutrality here?

While some in the press are calling Sanders a neanderthal, they are pretending that the election is fair. Given the numbers and the exit polls, it may be too early to call. If the election is not fair, and the true numbers have not been published, and the provisional ballots are not counted, things are going to go south for the Democrats, and especially for Clinton.

Think about it. Any pollster working from the published numbers that have Hillary winning the California primary will have no idea what to expect in November. The animosity towards Clinton will only grow with time and it will eventually be too large to hide. The Bernie or Bust crowd will consolidate and make their voices known one way or another.

Add in New York and their problems, and it becomes clear that Hillary will very likely lose California and New York out of protest votes. Donald Trump, may not be the best man to run for president, but he's not an establishment candidate. He doesn't live in the beltway the way Clinton does. But he has the name recognition for a protest vote. A big one.

Fortunately, the Sanders campaign is putting together Plan B. There is already evidence that Sanders is preparing for an independent run if the convention doesn't work out, and a good chunk of voters want to see him at the convention to make his case for the nomination to win it. We know the odds of that happening given who is sponsoring the convention. The Sanders campaign is filing paperwork to run as an independent should the need arise. 65% of Americans polled want him to run as an independent. I would love to see this happen if he can't get the Democrats on board.

That will divert resources from Hillary's campaign for fighting Trump to fighting Sanders and Trump. Yes, it looks like Trump has an undivided party behind him, but even now, cracks are starting to appear. There is even a Libertarian candidate that is polling well among voters who can split the vote for the Republicans with 10%. Can you hear the screams of B-1 Bob Dornan? I do. He lost the votes he needed to win to a Libertarian.

So if Hillary wants to steal this one, it's only going to get harder and tougher. Sanders could still run as an independent and if he does, I believe that effort will overcome all of the resistance put up by the Democratic Party. He doesn't have to run in a fake race for the nomination. He has the name recognition now. And for November, there are going to be exit polls and a lot more scrutiny to see who got the votes.

Bernie, if you're reading this, run however you want to run. I'll vote for you whether you're Green Party, Democrat or independent. It doesn't matter to me which party you're with, as long as we can get your butt into the White House!

Feel the Bern.
Posted by digitalfirehose at 5:42 AM