The hysteria over Trump's budget has been mounting for weeks. There is nothing in the news but deep, deep cuts to everything except the military. And even then, some say that we're not spending enough on the military - never mind that we spend more than the next 6 to 12 countries combined (depending on the source you choose to read). It may be awful to watch, but the debate has subtext.

Lately, most of the focus has been on the Affordable Care Act (aka, Obamacare) and the American Health Care Act. Most of the press has been given to the Republicans and their surreal opinions on the state of health care. Naked Capitalism has a very good shortlist of some of the untruths Republicans are brazen enough to speak, which you can read about in full detail here. I've reduced it to a short list here for your review so that we can explore then in some detail from a different perspective:


That is a short list of talking points that Republicans have made about the current state of health care. The first thing we should notice, as the Naked Capitalism article notes, is the complete absence of science. There is no scientific or empirical evidence backing up these outrageous claims. They are all judgments on the people who suffer the most from the current crisis of health care.

Since Congress is 91% Christian and 99% of Republicans in Congress are Christian, we can infer that according to some members of Congress, "God is punishing those who are sick, so lets pile on". So sorry for the 1st Amendment. I also note with interest that as far as I know, there has been nothing provided in the budget to teach people the skills they need to stay healthy. Even if they did, people who have the skills to lead a healthy life can still get sick and they can still have accidents. Perhaps they did not see or hear of Carl Sagan with his brainy quote: "Extinction is the rule. Survival is the exception." I guess that's a bit much for people who believe in an afterlife.


From the faith of some members of Congress, we can also infer that "sick people should not be rewarded, they should be punished". I'm still thinking about the 1st Amendment here. Can we also infer that some in Congress believe that they are "doing God's will"? If so, there needs to be a healthy and public discussion of just what "God's will" is. Who knows what God's will is? I sure don't and I doubt anyone in Congress really knows. Given the immense egos of the people in Congress, it would be easy for them to conflate their own will with God's will.

Somewhere in their Good Book, God said, "Vengeance is mine". That would seem to mean that it's not up to those in Congress to decide who gets to live and who gets to die. I think I'll go with Gandhi, "An eye for an eye and the whole world is blind".

So from what we can see, we have members of Congress constituting a majority, preaching a faith, and being unwilling to use federal funds to teach the skills necessary to "deserve" health care. Are those poor people who are so undeserving of health care really contributing to the high costs of health care? I don't think so. As one member of Congress put it, "the poor will always be with us", and they always have, so the poor can't really be used to explain the high cost of health care.

Our health care costs were in line with the rest of the industrialized world for much of modern history until sometime around the Reagan Administration. Economist Dean Baker has some interesting numbers to share with us, and a nice little chart he got from the OECD: 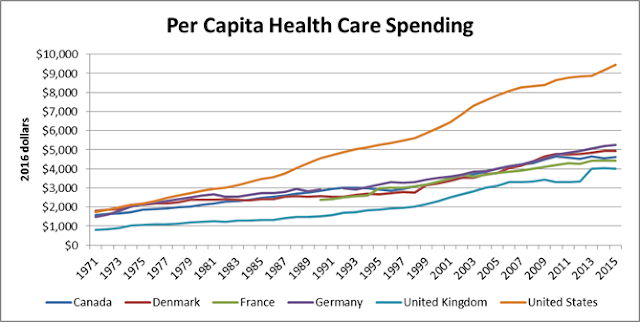 Notice how American health care costs were fairly close to other industrialized countries for at least 10 years since they started collecting data in 1971. Notice also, how health care costs in the United States diverged in 1981. Hmm. Isn't that around the time of the Reagan Revolution? I think it is.

In Baker's article he had this to say about the costs of health care:


The reason our health care costs have risen so much more rapidly than anywhere else is not Baumol's disease. Health care is a service everywhere, not just in the United States. The difference stems from the fact that doctors, insurers, drug companies, and medical equipment makers are far more capable of controlling the political process in the United States than in these other countries. They use their political power to restrict competition and get government subsidies. As a result, these actors are able to secure massive rents that come out of the pockets of the rest of us.

Rent seeking? Really? Since the poor have always been with us, it can't be them. It must be the changes in public policy made during the Rent Seeking ... I mean, Reagan Revolution. Doesn't it seem odd then, that no Republicans are talking about this development in our history and what we can do to reverse those changes?
Posted by digitalfirehose at 6:16 AM