This is what happens when society teaches punishment instead of skills

A few weeks ago, I read the headlines of a story about a boys reform school in Florida. I passed by it, thinking nothing more than, "ho hum, just another sensational story." But I've been thinking about that school ever since. So did my own search instead of looking for that meme from somewhere in the depths of my Google+ feed, and here is what I found.

The Arthur G. Dozier School for Boys, aka, "The Florida School for Boys", was opened in 1900 and was notorious for a wide range of abuses of boys that were sent there or wound up there. The first link I found was from The Smithsonian Institution, not exactly the first name in sensationalism. So I read on. I was intrigued by the picture of the crosses in the graveyard at the school at the top of the article. 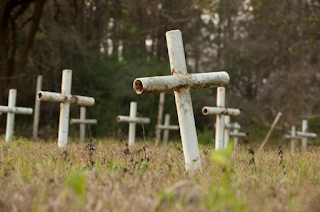 I read a few more articles and the literature is fairly consistent. Over a century of operation kids were severely beaten, whipped, denied clothing and food, one may have been shot and another was put in a large clothes dryer and died later from his injuries. Scientists have found 55 graves and have matched 14 DNA samples to identify the boys buried there. They found two graveyards one for people of color and one for everyone else. This Wikipedia article has a fairly detailed history of the school with numerous sources in the bibliography. Although no one seems to have been charged with a crime at the school, it was finally closed in 2011.

From my reading so far, I think it is fair to say that it was a public school teaching morality from religion. We know this from the crosses in the picture, and the segregation of the students based on race. The roots of American racism and segregation can be found in religion, Christianity to be precise.

This article is not intended to criticize religion in general, or even the brutal discipline practices at the Florida School for Boys. That has already been done. I believe that there is a wider and deeper message we can learn from this story. Those crosses in the picture are evidence of a fact that may now be plain for all to see: you cannot teach morality without teaching the skills required to achieve it.

Those crosses in the picture tell a story of a school staff intent on beating the "evil" out of the boys who were sent there by their parents or a state agency responsible for disposition of orphans. Those crosses are evidence of the failure of reward and punishment as a method of discipline. No matter how severe the discipline, there were always some boys who would not comply, even upon risk of death.

There is another story here to consider. The addiction of abuse. The abusers who administered the punishment were addicted to the abuse. When humans engage in physical conflict, the brain sends a massive shot of adrenaline throughout the body. For the abuser, this is a huge hit, every bit as powerful as cocaine or crystal meth. This hit provides a sort of "high" much like joggers experience with endorphins from the runners high, yet far more intense in the context of violence.

I have some first hand evidence of this myself. I felt it when I was spanked by my father as a boy. I felt it when I fought the kids who used to tease me at school. I felt it the moment before I hauled off a punch to the offender in the lunch line. I was always shaken by the experience of violence and can recall those same feelings with clarity to this day.

When we engage in violence of any kind, we feel this jolt of energy from the adrenaline. Combine that jolt with authority and you have a compelling reason to do it again. And again. Regardless of the consequences.

For adults there are 12-step organizations, the most well known being Alcoholics Anonymous. They teach the skill of not drinking, they don't just pray for the willingness to stop drinking. They don't punish people for drinking, either. They understand, probably better than any other organization, the power and the peril of addiction. They are widely regarded as the most successful organization to help people stop drinking. And they're free. They're also anarchists. No one is forced to do anything in that program. Nothing is compulsory, there are no dues to pay, and it is an entirely voluntary organization. The 12 steps are suggested, not required.

I'm sure there are many more organizations out there that teach skills. The point is that when we teach the skills of morality we get better results. There is a scientific organization dedicated to this effort, Lives in the Balance, headed by Dr. Ross W. Greene, PhD. Dr. Greene has 38 years of working with kids and is applying a very simple concept to challenging behavior in kids and adults: kids would do better if they could.

According to Dr. Greene, when kids exhibit challenging behavior, that's the signal, not the problem. It is evidence of lagging skills and unsolved problems. When we work with kids to solve the problems that get in their way, we also teach them the skills they need to do well. Kids want to do well, naturally. It's up to us to engage with the kids in collaboration to solve those problems the prevent them from doing well. That means it's not entirely up to kids or the parents to solve the problems. It's a partnership.

I believe that this is true of adults, too. Crime is evidence of challenging behavior in adults. When we teach adults the skills they need to adapt to their conditions, they get better. Dr. Greene's approach is being applied to detention centers for kids with very positive results. We could do the same for adults.

By now you're wondering what this all has to do with politics. Donald Trump ran as a "law and order" candidate. He wants to crack down on crime. So do many Republicans in Congress and in statehouses. Republicans in 5 states are pushing to make peaceful protest a criminal offense.

Here's the problem: putting people in jail doesn't really address why they're in the streets. As we've learned from the Florida School for Boys, teaching morality with punishment is very difficult and perhaps a fatal exercise. Those crosses in the backyard of that school can serve as a warning that we need to change course for humanity.
Posted by digitalfirehose at 6:25 AM